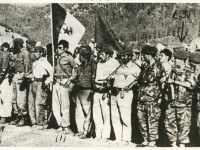 Rashōmon in the Sahara is the result of a research project funded by the Gerda Henkel Foundation in Duesseldorf. An international team travels from different parts of Europe to document the so-called “Ifni-Sahara War”, which took place between 1957 and 1958. It collects dozens of testimonies of combatants who took part in the conflict in Paris, Barcelona, La Unión, Casablanca, Rabat, Marrakech, Sidi Ifni, Tan Tan, Tarfaya, El Ayoun and Edchera.

The Ifni-Sahara war was fought in 1957-1958. The belligerents were, on the one hand, the National Liberation Army made up of mainly Moroccan military cadres, but with a troop made up of inhabitants of the Ifni region and Spanish Sahara; on the other hand, the Spanish and French colonial armies. The aim of the Rashōmon project was to recover the memories of the veterans, trying to bring voices and memories out of oblivion. The idea was to place the story of the former LNA members and indigenous troops in the colonial armies that confronted them in its historical context and restore the complexity of the related versions in a polyphonic narrative through the film.

Inspired by the film Rashōmon by Akira Kurosawa, in which a single event is explained from different points of view, this film brings together multiple narratives that make up a complex image of those related events.

The last part echoes the restrictions imposed on the team during the Morocco and Western Sahara, due to the stifling political atmosphere of the atmosphere of the occupied territory. Indeed, the aim is to draw the contemporary resonance of the events of 1956-1958 and their complex historical 1958 and their complex historical legacy, which are manifested in the situations situations experienced by the team during their stays in both countries. In other words, in the film, the authors are one of the parties at stake because their subjectivity also colours the reconstruction of historical events offered to the audience. The team accepted the challenge of leaving the “comfort zone” of researchers to become actors in the construction of a narrative.

Francesco Correale is a historian at CNRS/UMR 7324 CITERES in Tours, specialist in colonial history in North Africa and the Sahara, has conducted research in the in the main European archives of documentary collections on the history of the region. He has carried out various research missions in Morocco, Algeria and the Western Sahara. Author of La Grande Guerre des Traficants. Le front colonial de l’Occident maghrébin (Paris, L’Harmattan, 2014) and numerous essays (articles and chapters in collective works) on the history of the region, was co-editor in 2014-2015 of a special bilingual French Spanish edition of the journal Les Cahiers d’Emam on the (https://emam.revues.org/739), as well as co-editor of the book Sahara Occidental. Conflit oublié, population en mouvement (Tours, PUFR, 2018). From 2019, he led an international and multidisciplinary research network on Coloniality, Seclusion and Order. Colonial and postcolonial forms of postcolonial forms of internment in and around the Mediterranean.

Alberto López Bargados is an anthropologist, lecturer at the Department of Social and Cultural Anthropology at the University of Barcelona (GRECS), is a specialist in the Western Sahara and has conducted research in Mauritania, southern Morocco and western Algeria since 1994. Author of Arenas coloniales. Los Awlad Delim ante la colonización franco-española del Sáhara (2003) and Cultures du Littoral. Dynamiques frontalières entre les Canaries et la côte saharo-mauritanienne (2010), has also written numerous articles on the subject. He was also co responsible for the exhibition organised in 2018 at the Museu Etnològic i de les Cultures del Món on the Spanish military in Ifni: Ifni. La mili dels catalans a l’Àfrica.

Camille Evrard is a historian and researcher associated with the FRAMESPA laboratory at the Jean Jaurès University in Toulouse and at the UMR 7324 CITERES in Tours, is a specialist in the colonial and post-colonial history of in Mauritania, Niger and Mali. She has carried out She has carried out extensive research in the field and in African, French and Spanish archives, and has heard from former military actors in the region. She has published in Vingtième siècle, Les Temps Modernes, or Relations internationales, as well as in several collective works on the conquest, the colonial police or post-colonial African armies. Member of the editorial board of L’Année du Maghreb, she is co-responsible for the annual Mauritania dossier. Finally, she is co-editor-in chief of a brand new online journal, the Revue d’histoire contemporaine de l’Afrique.

Jean Philippe Corbellini, image and sound technician at the CNRS, works at the Maison des Sciences de l’Homme (MHS) Val de Loire, in Tours (France). He was co-authored, with Francesco Correale, the video documentary entitled Sahrawi refugee camps: a story of resilience? The floods of October 2015 (https://www.canalu.tv/video/msh_val_de_loire/los_campamentos_de_refugiados_saharauis_una_historia_de_resiliencia_las_inundaciones_de_octubre_2015.20831); director of the webdocumentary: L’application de la loi Veil à Tours (2015) (http://webdocloi-veil.univ-tours.fr/). He teaches audio-visual processing and editing at the University of Tours.

Mohammed Mohammed Ahmed Dahmi, sociologist, independent researcher in Smara, and Khalid El Mansouri participated as intermediaries and translators during the missions to Western Sahara and Morocco.