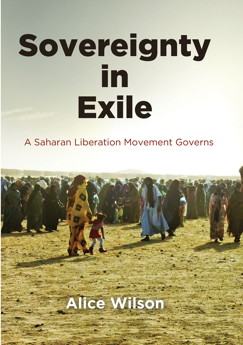 Sovereignty in Exile explores sovereignty and state power through the case of a liberation movement that set out to make itself into a state. The Sahrawi Arab Democratic Republic (SADR) was founded by the Polisario Front in the wake of Spain’s abandonment of its former colony, the disputed Western Sahara. Morocco laid claim to the same territory, and the conflict has locked Polisario and Morocco in a political stalemate that has lasted forty years. Complicating the situation is the fact that Polisario conducts its day-to-day operations in refugee camps near Tindouf, in Algeria, which house most of the Sahrawi exile community. SADR (a partially recognized state) and Polisario (Western Sahara’s liberation movement) together form an unusual governing authority, originally premised on the dismantling of a perceived threat to national (Sahrawi) unity: tribes.

Drawing on unprecedented long-term research gained by living with Sahrawi refugee families, Alice Wilson examines how tribal social relations are undermined, recycled, and have reemerged as the refugee community negotiates governance, resolves disputes, manages social inequalities, and improvises alternatives to taxation. Wilson trains an ethnographic lens on the creation of administrative categories, legal reforms, aid distribution, marriage practices, local markets, and contested elections within the camps. Tracing social, political, and economic changes among Sahrawi refugees, Sovereignty in Exile reveals the dynamics of a postcolonial liberation movement that has endured for decades in the deserts of North Africa while trying to bring about the revolutionary transformation of a society which identifies with a Bedouin past.