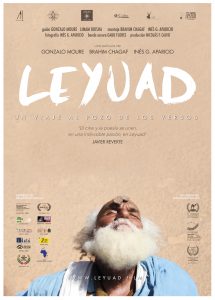 On the occasion of the publication of the Rites de la tente (ed. Atelier du Tilde), of the Saharawi poet Limam Boicha,

A film screening and debate around the movie “Leyuad, journey to the source of verses”

Synopsis: An initiatory and poetic journey at the heart of Sahrawi culture.

Abstract: Limam Boisha, a Saharawi poet who lives in Madrid, admits that he was “in need of Sahara”, and travels to Western Sahara to recover inspiration for his poems. There, Hamida Abdullah tells him the journey with the philosopher Belga Mohamed Salem and the poet and scholar Bonanna Busseid, to Leyuad, in the heart of Tiris, the ancestral land of the Saharawi people, path that showed them Badi Mohamed Salem , the oldest of the Saharawi poets alive. A long and difficult journey, in search of inspiration, at the source of poetry, a poetic and emotional journey. In Leyuad, waiting for them under his tent the poet Sidi Brahim, who will make them discover the miracles of a unique place, and plunge them into the myths and secrets of the geniuses of the desert, “those who can not be named”.