Prize Jaime Brunet 2018 : “The processes of truth, justice and reparation for the victims of enforced disappearances in the Western Sahara conflict” – Maria Lopez Belloso

HomeNew parutionsNew publicationsNewsPrize Jaime Brunet 2018 : “The processes of truth, justice and reparation for the victims of enforced disappearances in the Western Sahara conflict” – Maria Lopez Belloso 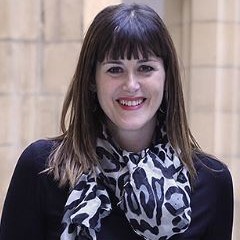 María López Belloso, research advisor at the University of Deusto and member of OUISO observatory, has been distinguished with the second Jaime Brunet Doctoral Thesis Prize for her work “The processes of truth, justice and reparation for the victims of enforced disappearance in the Western Sahara conflict”. The prize, awarded by the Jaime Brunet Foundation (based at the Public University of Navarra, UPNA) and endowed with 2,000 euros and the publication of the work, seeks to recognize those doctoral theses whose basic research content has a direct relationship with human rights and your defense and promotion.

The thesis of the researcher, defended in 2017 at the University of Deusto and directed by professors Felipe Gómez Isa and Carlos Martín Beristain, analyzes what she describes as the “forgotten conflict” of Western Sahara from the perspective of human rights addressing, in particular , the crime of forced disappearance. To this end, the author, who was part of the research team that led to “El oasis de la memoria”, analyzes in detail 95 cases of forced disappearance, 86 of them collected in that publication and the remaining nine, in “Meheris: la esperanza posible”. The researcher indicates that it is necessary “a real political will to transform reality and break with the past of human rights violations” and denounces that “the right of victims to the truth has not been respected”. The results of the work, as López points out, are expected to be useful so that the affected people can defend their rights before the international instances and the Spanish National Justice.

The Jaime Brunet Foundation, in addition to this award, gives two more: the Jaime Brunet International Prize and the Jaime Brunet University Prize, the latter for undergraduate and master students. In the 2017 call, the first of them, recently delivered, went to the Vicente Ferrer Foundation and the second, to the student Ainara Erice Casado.