In the Media : Hunger strike of Claude Mangin-Asfari 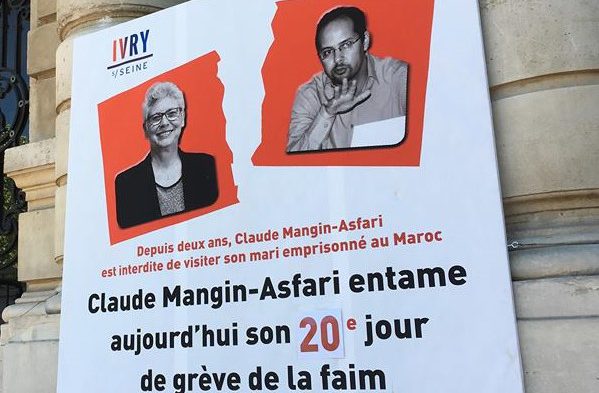 Article from the newspaper l’Humanité: https://www.humanite.fr/sahara-occidental-claude-mangin-asfari-la-francaise-qui-defie-le-roi-du-maroc-654911

Since April 18, 2018, the French Claude Mangin-Asfari has started a hunger strike in order to obtain access to her husband Naâma Asfari, a political prisoner in Morocco. Her decision was taken after her fourth deportation by the Moroccan authorities. It has been two years since Claude Mangin unsuccessfully tried to visit her husband imprisoned for 7 years.

The Sahrawi militant Naâma Asfari is a figure of the peaceful resistance against the occupation of the territory of Western Sahara by Morocco. He was arrested following the dismantling of the Gdeim Izik protest camp and the clashes on November 8, 2010, which claimed the lives of 11 members of the security forces. Last summer, after a controversial trial, Salé’s appeal court upheld the verdict of military justice by sentencing him to 30 years in prison.

She was working for the Catholic Committee Against Hunger and for Development (CCFD) when she left in 1990 for the Tindouf refugee camp in Algeria. Touched by the conditions of the refugees and their political struggle, she decided to stay there for another two years. It was during this period that she met Naâma Asfari, then studying international law at the University of Nanterre […]. They got married in 2003 in Tan-Tan (Morocco).

When her husband is imprisoned in 2010, she decides to fight for her release and visits him during the school holidays until 2016 when the Moroccan authorities refuse her for the first time to see her husband.

From the room she occupies above the town hall of Ivry sur Seine, she receives all the people wishing to show her support and continues her fight for the release of her husband.