Call for papers – How is research on the Western Sahara becoming regenerated ?

HomeCallNewsCall for papers – How is research on the Western Sahara becoming regenerated ? 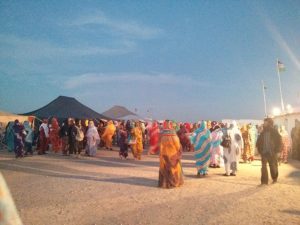 Beyond the Poetics of a Dead End:  How is research on the Western Sahara becoming regenerated?

For more than twenty-five years the conflict over the Western Sahara has been stuck in a situation of neither war nor peace. Research based in the region has reflected this situation generating what Alberto López Bargados has called “poetics of a dead end” over the conflict (Bargados, 2015). For decades, the celerity of armed conflict imposed ethical and methodological limitations on scientific research that relegated the bulk of the literature produced about the region to reproduce a good dosis of the discourses dominated by the political conflict. However, lately, the research on about the region is becoming renewed, finding itself at a very interesting moment in which a network of previously isolated investigations is being formed. The recent publication of several compilation works (BARREÑADA & OJEDA, 2016; BOULAY & FREIRE, 2017; OJEDA GARCÍA, FERNANDEZ MOLINA & VEGUILLA, 2017) as well as special issues in magazines (GIMENO & CORREALE, 2015) and even the birth of specialized observatories like the OUISO or the Study Center of Western Sahara of the Universidad Santiago de Compostela are a good example of this.

Without neglecting the pending issue of decolonization, this collective work sheds light on the economic and socio-cultural realities that underlie the political dispute, entangling and prolonging its irresolution. Characterized by a gendered, anthropological and historical perspective, and including the decolonial perspective, this new research is beginning to disturb the poetics of a dead end that Bargados pointed to. The recent defense of a significant number of doctoral theses on the Western Sahara is contributing to this renewal.

The intention of this proposal is to produce a number for L’Ouest Saharien that gathers the contributions of this new generation in this renewed field. In this sense it is important to point out contextual changes that have introduced new ethical and methodological challenges to research in the region (Allan, 2017, Boulay 2017) and to addressthe following questions: 1. How is research being carried out in the face of increased difficulties of access to the field? 2. How do such difficulties orient methodologies and research questions? 3. How do global transformations invite our attention to new subjects of reseach?

In the hope of contributing to shed light on alternative political paths to this process of decolonization, we invite proposals that reflect a renewal in the study of the multiplicity of economies, mobilities, as well as the trans-territorial identities and social relations that constitute the current socio-cultural map of the Western Sahara.

Please send your proposed article abstracts to vsolana@uwo.ca; enrique.bengochea@fcsh.unl.pt before the end of February 2019.

The journal “L’Ouest Saharien” is an international and interidisciplinary journal proposing rigorous ressearch of the social, political, cultural and economic dynamics that cross the space from the South of Morocco and Algeria to the rivers of Senegal and Niger, including the Western Sahara, Mauritania, Mali and Niger.

The journal has an editorial committee as well as an international reading committee, bringing together specialists from this region, from different disciplines and mastering one or more of these three languages.

The texts are subjected to a double anonymous evaluation, carried out by members of the reading committee or, failing that, by external experts. Proposals for original articles must not exceed 45,000 characters, including spaces and bibliography. They must be sent in Word format, Times New Roman and single spaced.