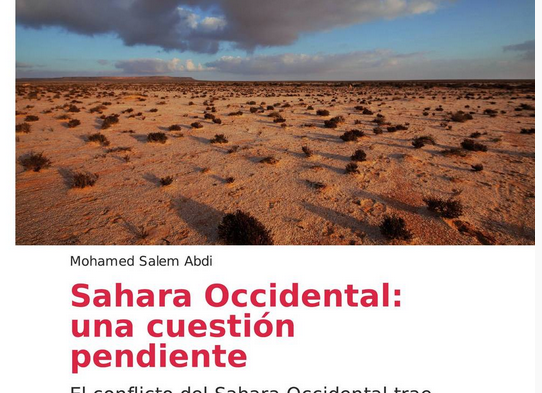 The Saharawi question has become one of the longest-running controversies in the world. This region is a former Spanish colony in northwest Africa. Since the withdrawal of Spain in 1975 this territory has experienced a conflict between Morocco claiming historical rights and the Polisario Front (considered by the United Nations to be the legitimate representative of the Saharawi population) calling for the organisation of a referendum of self-determination. Almost 50 years later, the conflict has stagnated and there is little prospect of a short-term solution. The controversy was condemning the stability and development of the North African region. It is the Sahrawi people, who live divided by one of the longest walls in the world and who are losing hope in any peaceful solution, who are the worst off this contest. The UN has been trying for decades to organise a referendum, but the interests of the great powers have crossed paths. Spain continues to be the administering power of the territory under international law. The EU is closely following the events of this long conflict.

Born in the Saharawi camps in Tindouf (Algeria) in 1990. Since 2001 he lives in Seville where he graduated in Journalism in 2014 from the University of Seville. In 2016 he obtained a Master’s Degree in International Law and International Relations in Granada. He is currently a doctoral candidate in this field at the University of Granada.